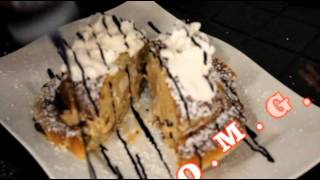 Gelato Sliders aka Gelato Burgers are the rage in Italy. We use an organic Brioche bun imported from Italy most of the year and during Christmas and part of the winter, you also have a choice of the Italian Christmas cake, Pannetone, cut it in half, filled with your favourite gelato scoop. Then we close it and put it in our Italian gizmo which seals and warms the bun or pannetone without melting the gelato. Cut it through the middle and you have two halves of a gelato hamburg

Il Gelato di Carlotta has arrived at Yorkville! Come visit us at Pusateri.

GELATO FOR DOGS IS A THING AND YOUR DOG WANTS SOME